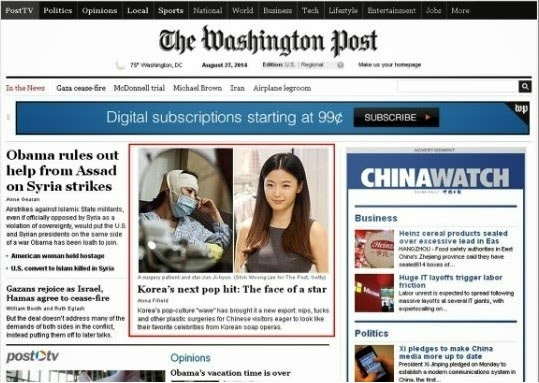 It was the FIRST time for the Washington Post
to visit Korean plastic surgery hospital!

Issued on Aug 26th, the article says that many of Chinese tourists, with Korean drama star mind, flock to Seoul for cosmetic surgery.

According to the article;

Especially the manufactured “K-Pop” music and schmaltzy soap operas — have become a phenomenon across Asia.
There’s a huge following in China, in particular, and an increasing number of fans are coming to South Korea not just for shopping and sightseeing, but also for nips and tucks — and more.

As the Washington Post reported,
It indeed is the huge storm of Korean Wave of plastic surgery in the world!

BK Plastic Surgery Hospital is standing firmly in the center of the world's trends!

Please look forward to our future step that will contribute to the world.