Hello everyone!
This is BK Plastic Surgery Hospital Korea.


Long time no postings.. 
It has been a long time since there has been a blog posting. Apologies~
We are to share with you the real patient’s review here. She has undergone an eyelid surgery procedure at BK Plastic Surgery Hospital Korea, and has full satisfaction with the result!
Let us begin!

(The following posting is translated from Korean to English for your better understanding)
Title: I had a consultation about double eyelid surgery at BK Plastic Surgery Hospital! 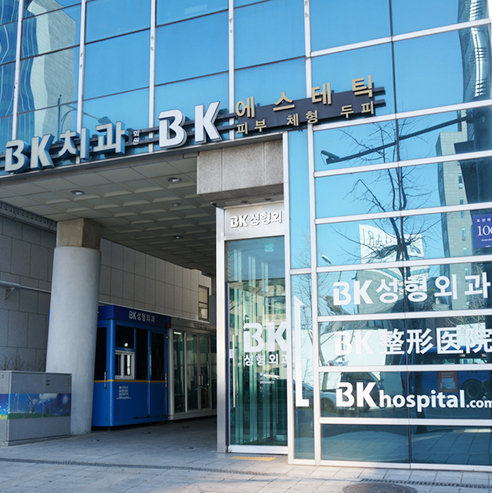 Hello everyone!
How are you? It is so cold in Korea~
I am going to talk about the consultation process I had at BK Plastic Surgery Hospital the other day.
Since the school starts soon, I wanted to get it over with as soon as possible before I have to go to school.

As you can see from the pictures above, I had visibly asymmetric eyes T.T
The eye on the right side of the picture is my left eye.
Before we talk further, I used to have a double eyelid, but there was weakness of levator muscle (the muscle that helps opening up the eyes) on the left eye. So I had to have the levator muscle correction 3 years ago at the ophthalmology. However, the surgery did not go well as expected and it resulted in the worst case scenario.
The conjunctiva on the left eye was being shown all the time, and I had to undergo revision eyelid surgery on the same side.
I was not happy with the result after two surgeries. And as it was not for the cosmetic purpose, I felt like the surgeries had worsened the condition of uneven eyelid. There was no fat left on the left eyelid, and it had developed another crease added on the double eyelid; whereas the eyelid fold on the right side was almost invisible due to its thinness.
I was stressed all the time about my eyes, because as you all know, I like to take pictures… It looks way worse in the pictures than being seen in the mirror.
Therefore, I had decided to go for the consultation at plastic surgery hospital.
BK Plastic Surgery Hospital Korea is one of the biggest plastic surgery hospitals in Gangnam district, Korea. And it is well known for its popularity and techniques of revision eyelid surgeries and double eyelid surgeries.
I had to take a train from Daejeon to Seoul, then I took a subway to sinsa station Exit 2, where there stands BK Plastic Surgery Hospital Korea right outside. 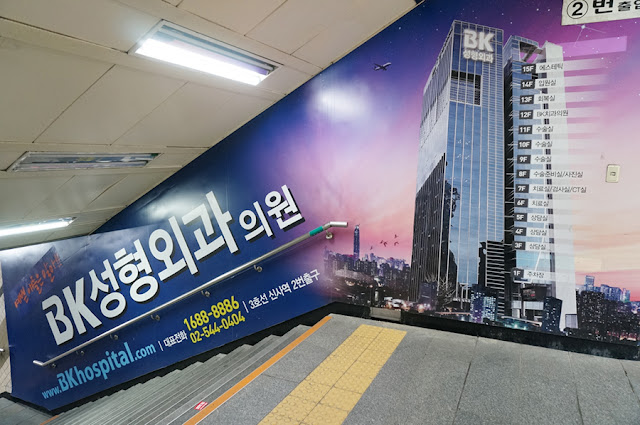 As I walked outside from the subway station, there was a huge advertisement sign of BK Plastic Surgery Hospital Korea; I could know its biggest scale before I even entered the hospital. 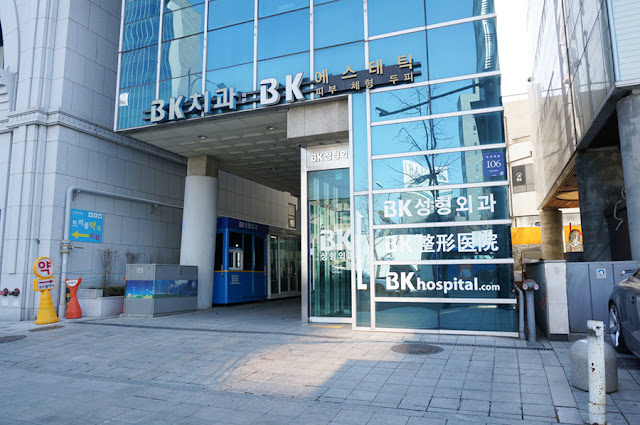 There stands BK Plastic Surgery Hospital Korea right outside the exit 2 of Sinsa Station, and it is 16-Floored building….. gosh it was so BIG!! 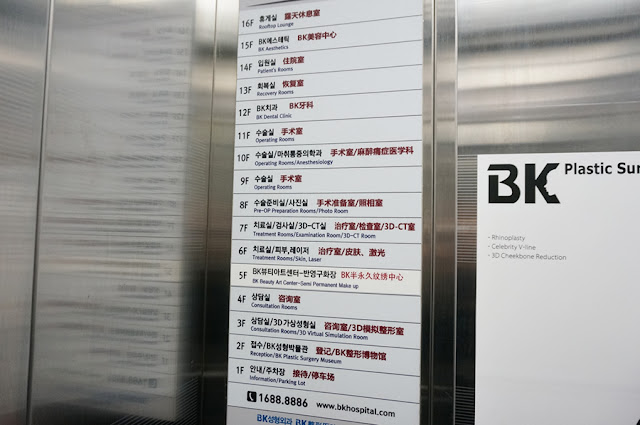 Look!!!!!
All 16 floors are being used as one plastic surgery hospital… I don’t know what to say anymore it is so big!
I took the elevator to the second floor, where there is a reception desk. I was given some kinds of forms to fill in my personal information and medical history. And I was also given the survey form that asks the kindness and service of medical staff of the hospital 
It is a secret what I had put but I know that they do care about the quality service to their hospital.
And what surprised me was that there were so many foreigners in the hospital. Almost half of the patients were different nationalities, including Chinese and others. Maybe this hospital is more famous and popular than I thought it would be… hahahah 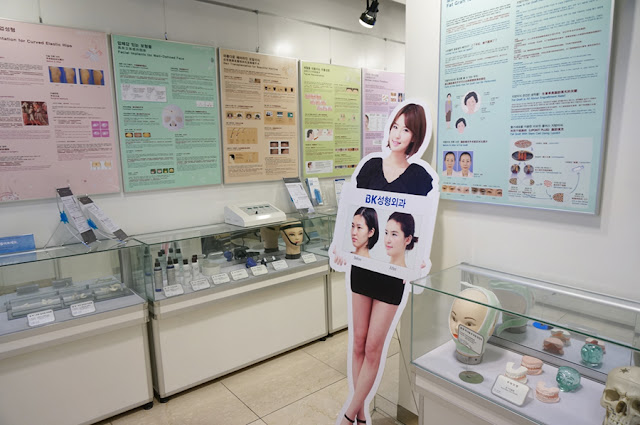 This is Plastic Surgery Museum. They said I should look around during the waiting time, so I did! Hehe 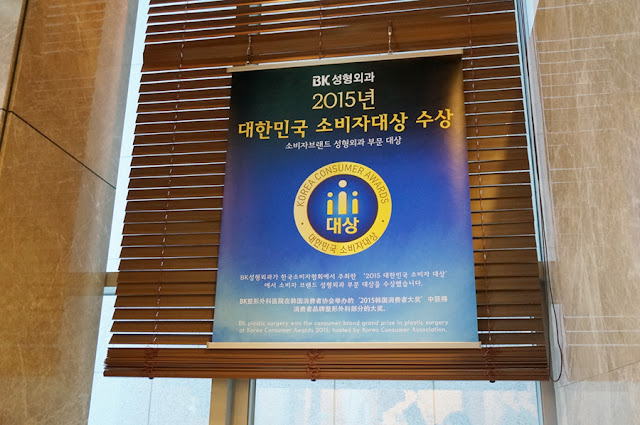 Wooh some kind of award >.<
I like the Korean show ‘Infinite Challenge’, and there were pictures of the show members on the wall! Apparently they filmed here for their dentist visit for the show.
Anyway, it looks just too big and famous now…. Wow
I waited playing on my phone with free wifi huhu… 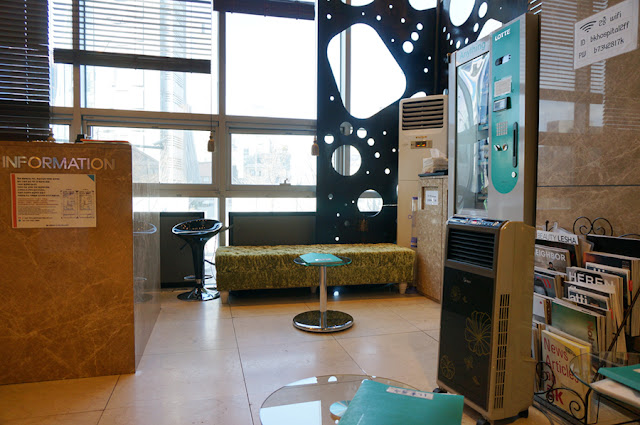 This is a broacher that has all before and after pictures. I could understand better with the pictures in the booklet thanks god. It’s so hard all these surgery names and procedures….
Anyway, that’s that for the pictures!
Let’s talk about the consultation I had!
First, the consultant had come into the room, and since I have had two surgeries on my eyes in the past, she would call the doctor who is the best at revision surgery cases.
The doctor named Dr. Kang Sang Gu came in, and he was really nice during the consultation, talking to me nicely about the eye shape that I want and any questions I have about the surgery procedure. I told him that I just want to even out the double eyelid folds on both eyes, and he was sure that he could make it happen after the surgery by him.
So I booked the surgery appointment, and came home.
If the doctor had said too many good and optimistic things like he is going to make the miracle happen, I would not want to undergo surgery with him. I liked his honesty the most!
I mentioned the outer corner extension procedures, but the doctor said I won’t be having too much improvement even after the procedure… a bit sad but oh well, that is my eyes’ condition :/
The building was well furnished and amazingly big, and the staffs were really nice.
I will be back with the pictures of one week after the operation!
Stay tuned :))))))))))))))) 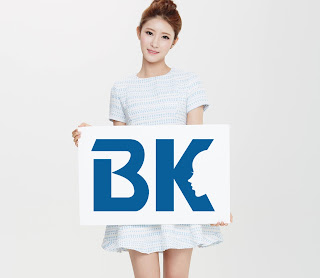