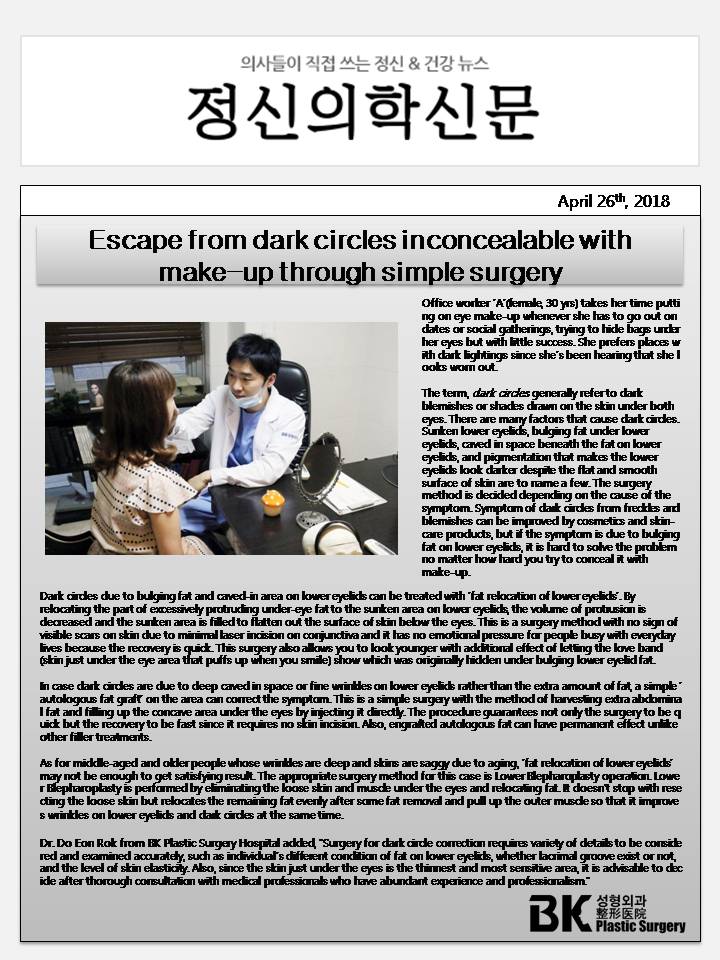 With no doubt, Blepharoplasty is one of the most common plastic surgery among Asian people. What many people don't know is that there are so much more than double eyelid surgery in the field of bleparoplasty. Dark circles, ususally known as 'bags under eyes' that makes the person look tired and old, can be corrected by several different methods of surgery and bring out younger and cheerful look.

Dr. Do Eon Rok from BK Plastic Surgery Hospital takes a detailed approach to explain different methods of dark circle corrections for each different factors for the symptom in the article of Psychiatric News.


Office worker ‘A’(female, 30 yrs) takes her time putting on eye make-up whenever she has to go out on dates or social gatherings, trying to hide the bags under her eyes but with little success. She prefers places with dark lightings since she has been getting comments that she looks worn out.

Dark circles due to bulging fat and caved-in area on lower eyelids can be treated with ‘fat relocation of lower eyelids’. By relocating the part of excessively protruding under-eye fat to the sunken area on lower eyelids, the volume of protrusion is decreased and the sunken area is filled to flatten out the surface of skin below the eyes. This is a surgery method with no sign of visible scars on skin due to minimal laser incision on conjunctiva and it has no emotional pressure for people busy with everyday lives because the recovery is quick. This surgery also allows you to look younger with additional effect of letting the love band (skin just under the eye area that puffs up when you smile) show which was originally hidden under bulging lower eyelid fat.

In case dark circles are due to deep caved in space or fine wrinkles on lower eyelids rather than the extra amount of fat, a simple ‘autologous fat graft’ on the area can correct the symptom. This is a simple surgery with the method of harvesting extra abdominal fat and filling up the concave area under the eyes by injecting it directly. The procedure guarantees not only the surgery to be quick but the recovery to be fast since it requires no skin incision. Also, engrafted autologous fat can have permanent effect unlike other filler treatments.

As for middle-aged and older people whose wrinkles are deep and skins are saggy due to aging, ‘fat relocation of lower eyelids’ may not be enough to get satisfying result. The appropriate surgery method for this case is Lower Blepharoplasty operation. Lower Blepharoplasty is performed by eliminating the loose skin and muscle under the eyes and relocating fat. It doesn’t stop with resecting the loose skin but relocates the remaining fat evenly after some fat removal and pull up the outer muscle so that it improves wrinkles on lower eyelids and dark circles at the same time.

Dr. Do Eon Rok from BK Plastic Surgery Hospital added, “Surgery for dark circle correction requires variety of details to be considered and examined accurately, such as individual’s different condition of fat on lower eyelids, whether lacrimal groove exist or not, and the level of skin elasticity. Also, since the skin just under the eyes is the thinnest and most sensitive area, it is advisable to decide after thorough consultation with medical professionals who have abundant experience and professionalism.”