Looks believed to be key in landing a job

Amid tough job market conditions, jobseekers are increasingly considering getting plastic surgery to enhance their competitiveness.

According to a survey of 1,090 jobseekers by Saramin, a job market information portal, three out of 10 people said they are planning to get plastic surgery to improve their chances of getting a job.

"Most college students have good qualifications these days as they prepare thoroughly for employment. Since resumes make little difference, impressions they give on interviewers matter more than before," said Kim Byung-gun, a plastic surgeon at BK DongYang Plastic Surgery Clinic.

Who gets plastic surgery?

Females were more positive about getting surgery, with 35.6 percent willing to do so, compared with male jobseekers among whom 22.4 percent were taken to the idea.

Kim Seok-han, a plastic surgeon at Opera Plastic Surgery, said that the number of male patients is increasing. "The ratio especially rises during the job search season. Men account for about 30 percent of our patients," he said.

He cited one of his patients as an example. The male college graduate was fluent in Japanese as well as in English and had an excellent GPA. However, he failed after two interviews to get a job. "He determined that the sense of inferiority regarding his appearance made him fail, and he had surgery on his eyes and nose at our clinic. He recovered his self-confidence and got the job he wanted," Kim recollected.

Age doesn't matter. At BK DongYang Plastic Surgery Clinic, those in their 40s or 50s often get consulting on cosmetic surgery to enhance competitiveness in their job. "In the past many of those who opted for surgery were seeking a stewardess job or roles in broadcasting, but now they come from every industry. Those who work in sales or those who have to meet people regularly in their job are especially serious about it," BK's Kim said.

Jobseekers strongly believe that their physical appearance matters in the job market. In the survey by Saramin, 67.2 percent of those planning to get the surgery said they were considering it as they believed it mattered much in employment. Among the jobseekers surveyed, 5.1 percent had already had some kind of plastic surgery to get a job. They were very satisfied with 96.4 percent of them saying that the surgery worked positively.

Recruiters agreed, with 39 percent saying that those with good looks have a better chance to succeed in a job interview. Nine out of 10 recruiters said the first impression mattered.

Plastic surgeons explained that jobseekers hope to increase self-confidence through the surgery.

"The surgery helps improve first impressions. Those who think they are unattractive feel inferior during interviews. That's why they fail," said Hong Ki-seok, a PR manager at Medi Hershe.

Kim at the BK DongYang Plastic Surgery Clinic said that most jobseekers get surgery on their eyes or nose. "If the eyes are too small then one doesn't look soft. And, drooping eyelids make one look sleepy and unenthusiastic," he said. Male jobseekers often get surgery on a hooked nose as it makes them look unfriendly, according to Kim.

Ryu Sang-wook, a plastic surgeon at Grand Plastic Surgery, said those with a protruding chin or mouth, often have problems with accurate pronunciation. "Those seeking surgery in order to land a job are more satisfied with the results than those who get it for purely vanity as they do it to make up for their complex," he said. He said one of his patients who had small eyes had a problem in interviews since he avoided eye contact after people repeatedly told him that his eyes were scary.

Those who want an immediate change right before an interview choose "petit surgery" like fillers. "It's cheaper but the effect doesn't last forever," Hong at the Medi Hershe explained.

How much is it?

According to the survey by Saramin, those who underwent plastic surgery for a job spent on average of 4.38 million. Those who plan to get it were willing to spend 6.5 million won.

It usually takes between 1.2 and 1.5 million won to get surgery on the eyes and 2.5 to 3.5 million won for the nose. That's not small money for jobseekers. When asked how they would fund the surgery, nearly half of the respondents were planning to get part time jobs, 23.2 percent were going to get financial support from their parents, and 12.9 percent were thinking about charging their credit cards. 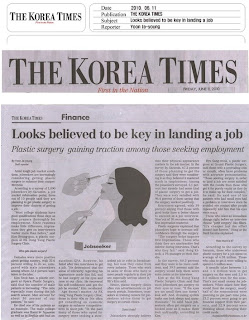